Bus from KL to Kluang 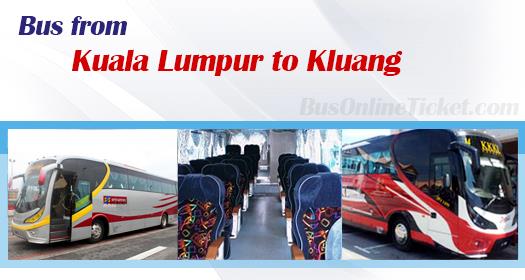 Taking a bus from KL to Kluang is the locals’ preferred choice of transport even though train service is available.

Advantage of taking bus from KL to Kluang

Secondly, due to the current upgrade of the train system, passengers are required to make a transit in Gemas before boarding another train to Kluang. Sometimes, the waiting time during the transit can be quite long. This creates additional disadvantage to train service in serving passengers from KL to Kluang.

KKKL and S&S International are the two well-known operators serving bus from TBS (Terminal Bersepadu Selatan) to Kluang Bus Terminal. They are the locals’ favourite brands because of their punctuality and frequent schedules throughout the day.

The bus fare is reasonably charged at RM 25.00. The bus usually takes about 3 hours from KL to Kluang, depending on traffic conditions. Because there is no toilet facility in all coaches in Malaysia, hence 1 stopover is provided for toilet break. Departures begin as early as 8:00am and as ends as late as 9:30pm.