Bus from Johor Bahru to Mersing 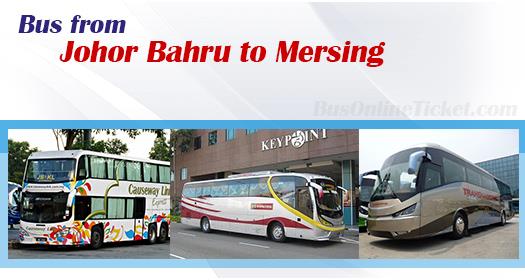 S&S International, Causeway Link, Plusliner, Maraliner, and Transnasional are the reliable coach companies providing bus from Johor Bahru to Mersing. With a total of 14 daily departures, travellers can choose the schedule that best fit their convenience. The journey duration is about 2 hours.

The departure point for all the coaches going to Mersing in Johor Bahru is at Larkin Bus Terminal. Their arrival point is at Mersing Bus Terminal, which is 10 minutes walking distance from Mersing Jetty. Those who continue the journey to Tioman Island by ferry can easily walk to the jetty to catch the ferry to Tioman Island.

In Larkin Bus Terminal in Johor Bahru, there are many agents who may try to sell you bus tickets which are without clear departure time. The best way to avoid them is to tell them politely that you have purchase Johor Bahru to Mersing bus ticket in advance via online. They will not continue to disturb you. Hence, booking your Johor Bahru to Mersing bus ticket online at BusOnlineTicket.com is not just hassle-free, but also helps you to avoid those agents in Larkin bus terminal politely.