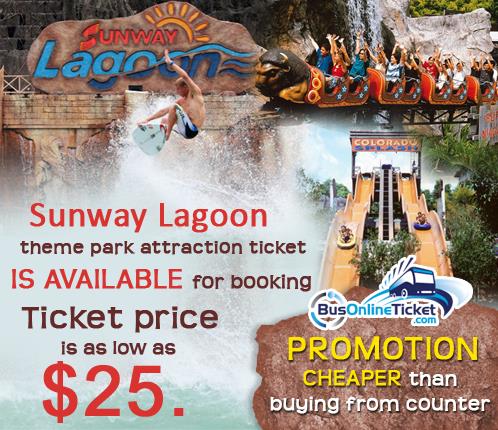 Sunway Lagoon is an amusement theme park located in Bandar Sunway, Petaling Jaya, Malaysia. It started with both the Water Park and Amusement Park in 1993. Sunway Lagoon Park then gradually added other parks like Extreme Park, Wildlife Park, and Scream Park and has become one of the most visited tourist destination in Malaysia. Sunway Lagoon, being part of Malaysia’s first fully-integrated themed resort – Sunway Lagoon Resort, offers visitors the convenience of a 5-star hotel, Sunway Hotel, a grand shopping mall, Sunway Pyramid right next door and other modern facilities. Sunway Pyramid is a distinctive retail landmark because of its most easily recognised designs is the Egyptian-inspired Pyramid with a lion “standing guard” at the entrance.Whether you are looking to cool down in the tropical sun @ Asia’s Best Water Park, looking for a hair-raising experience @ Scream Park, enjoying the thrilling rides @ Amusement Park, getting your adrenaline pumping @ Extreme Park, or getting up close and personal with your favourite animals @ Wildlife Park, there is something for all @ Sunway Lagoon. Sunway Lagoon is a place where you will bring back more than just memories
5 Parks – Amusement Park, Water Park, Wildlife Park, Extreme Park, & Scream ParkAmusement Park: Put on your best cowboy swagger as you take a trip down the Wild Wild West. Experience the excitement of the Niagara Falls, Flume Ride, brave the raging waters of the Grand Canyon River Rapids or head to the Alamo games arcade to test your dexterity and impress the damsels! Quench you thirst for adventure at the World of Adventure with rides that will spin, dip, thrill and have you screaming for more. Scream your head off on the Tomahawk, take a trip to the high seas on the Pirates’s Revenge – Malaysia’s first 360-degrees Rotating Pirate Ship or walk on the World’s Longest Pedestrian Suspension Bridge – all 428 metres of it.

Water Park: Race down the six-laned Congo Challenge, a head-first slide with a difference or brave the slithery adventures of the African Pythons slides as you explore the wild side of the Waters of Africa. A fun adventure for all, even the little ones have something to cheer about when you let them loose at Little Zimbabwe, the interactive water playground. Laze around a tropical beach paradise – right in the middle of the city. Go surfing, body boarding or get a tan on the World’s Largest Man-Made Surf Beach — the only one in town, or enjoy a friendly game of beach soccer and beach volleyball. For a little more action, show off your skills on the FlowRider, Malaysia’s First Surf Simulator.

Wild Life Park: Get in touch with your inner Tarzan as you get up close and personal with his ‘wild’ friends! With more than 150 species of amazing and exotic animals from across the globe, learn more about them at Malaysia’s first-ever fully interactive and educational animal-themed attraction. Wildlife Park @ Sunway Lagoon also features various educational programmes and live animal show; ready to astound the most inquisitive of minds.

Extreme Park: For Adrenaline pumping action, challenge yourself with the intense feats at the Extreme Park. Hit the bull’s eye at the Archery range, go off-road on the All Terrain Vehicle (ATV), or soar through the lines of Malaysia Longest Flying Fox. Take Extreme to a whole new level with Asia’s Highest Slingshot Ride – the G-Force X or take the ultimate leap of faith on Malaysia’s First Bungy Jump and earn your bragging rights as an extremist!

Scream Park: Live up the terror of everything that goes bump in the night as you walk though the home of all things scary at Scream Park! Begin the fright fest at the Pontianak Theatre of Fear before tip-toeing to Night At The Museum; Alive & Scary! Live through that only to come face to face with some local terrors in Rumah Hantu in 3DX and Tunnel of Penanggal in 3D. Fight or flight is up to you at Terminator X: A Laser Battle For Salvation. Just like the famous movie, it won’t be too long before you say, “I’ll be back”.