Home » Bus from Penang to KL

Bus from Penang to KL 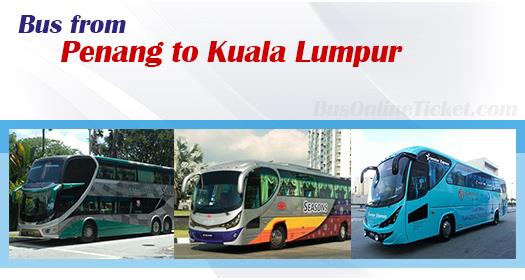 Bus from Penang to KL is one of the popular bus routes in Malaysia connecting two tourist-rich cities. Millions of locals and tourists travel between the two cities every year. Penang houses attractions like Kek Lok Si Temple, the wall painting by Lithuanian artist Ernest Zacharevic, Unesco World Heritage Site The Streets of Georgetown, Batu Ferringhi Beach etc. As for KL, attractions include Petronas Twin Towers, Batu Caves, Chinatown, Little India in Brickfield etc. All the mentioned attractions are among the top tourist hotspots in Malaysia.

Why Take the Bus from Penang to KL

Taking a bus is convenient because one of the bus departure points in Penang is at Prangin Mall Komtar Georgetown. Most hotels, food, and attractions are concentrated here in Georgetown, therefore the departure location is convenient for passengers taking the bus from Penang to KL. On the other hand, taking a flight or train from Penang to KL is less convenient in terms of departure points. This is because the airport is located about 20 minutes driving distance away from Georgetown and the nearest train station in Penang is at Butterworth, which is again about 20 minutes driving distance away from Georgetown.

Another advantage of taking a bus instead of flight is that check-in time for a bus is usually 30 minutes before departure, whereas check-in time for a flight is always 2 hours before departure. Even though it is faster to travel by flight, many passengers prefer a bus to flight because the total duration for a bus trip from Penang to KL is faster, after considering the earlier check-in time at Penang Airport and traveling time from KLIA 2 to KL city or from Subang Airport to KL city when taking a flight.

Last but not least, taking a bus is more comfortable than taking flight because of the fully reclining seat and air-conditioned environment. Some of the famous bus operators providing bus services from Penang to KL include GJG Express, KKKL Express, Seasons Express Penang, Billion Star (Penang) and many more. Most coaches provide spacious and comfortable seats and leg room to ensure their passengers’ comfort during the travel. Some coaches like Nice also provide personal TV onboard for passengers.

The bus fare for a bus from Penang to KL ranges from RM 30.00 to RM 50.00 depending on the bus operators. During festive seasons like Chinese New Year and Hari Raya Haji, prices may vary slightly. However, comparing to flight fare, bus fare is always much more economical.

The duration for a bus from Penang to KL usually takes about 4 hours, depending on traffic conditions. Buses depart as early as 6:15 am in the morning and as late as 1:00 am after midnight. Most coaches provide direct services to KL with 1 washroom break provided along the highway.