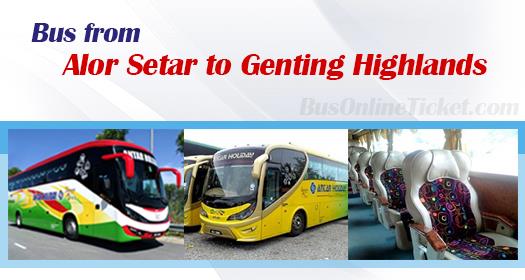 The duration required for bus from Alor Setar to Genting Highlands will takes at least 6 hours depending on traffic and weather conditions. The bus fare is reasonably charged at RM 55.00.

Currently, the outdoor theme park in Genting Highlands is closed for major renovation for the opening of their new theme park, Twentieth Century Fox Theme Park, in late 2017 or in early 2018. There will be up to 25 rides and attractions offered for children and adults. The rides and attractions are built and designed based on film and franchises such as Night at the Museum, Ice Age, and Titanic.

With the upcoming completion of Twentieth Century Fox Theme Park, Antar Holiday Expressâ€™ bus route from Alor Setar to Genting Highlands will play a significant role to bring travellers in the north to visit Genting Highlands.

Booking online in advance at BusOnlineTicket.com is always recommended to avoid disappointment due to limited bus schedule daily offered by Antar Holiday Express.