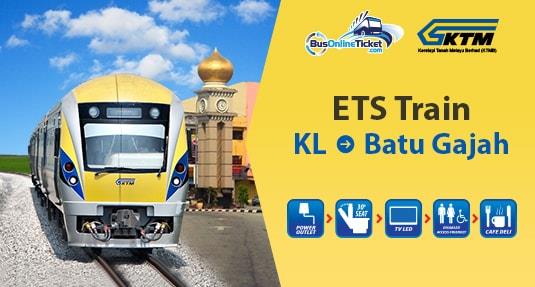 Batu Gajah has many interesting heritage buildings to visit. Among the famous ones is the Kellie’s Castle located around 10 minutes drive from the train station. So, you will also find some tourists travelling to Batu Gajah to visit these sites.

There are three types of ETS train from KL to Batu Gajah:

The departure point for ETS train from KL to Batu Gajah is in KL Sentral. There is another train station in Kuala Lumpur, also located at the city center of KL. However, KL Sentral is a more popular pickup point because you can reach KL Sentral via many types of public transportation such as LRT, KTM train, ERL, local bus and the Monorail.

KL Sentral is one of the transportation hubs in Kuala Lumpur. The building is connected to a shopping mall called Nu Sentral. You can find large varieties of food choices from both KL Sentral and the Nu Sentral. There are also prayer rooms, free public toilets and convenience store in KL Sentral.

KTM Batu Gajah train station on usual days is not a busy station. On weekends or festive seasons, however, the students going back to their hometown from their boarding school or university will mostly crowd the train station.

There is less chance to get a public transportation once you reach the KTM Batu Gajah train station, except taxi. Since the train services are mostly for the locals, they would have their family member or a friend to pick them up from the train station. You can also try online apps to book a fetching service like Uber or Grab.

The train is comfortable and suitable to facilitate senior citizens and OKU or handicap.

Passengers can find F&B bar in coach C to get some food or drinks with reasonable price.

Toilets are in coach B & E. Handicap toilet is in coach D.

Muslims can also find a Musolla in coach C right beside the F&B bar.