Bus from Singapore to Genting Highlands 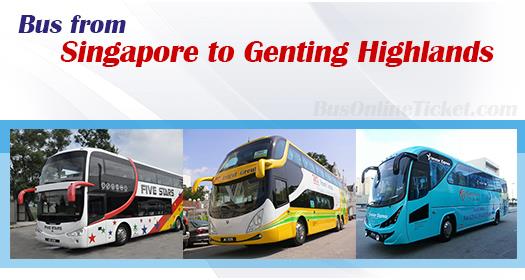 These buses generally depart from Golden Mile Complex, Beach Road, Boon Lay, and many other neighbourhood areas (usually bus stops) like Ang Mo Kio, Tampines, Chinatown, Jurong East, and many others. Arrival points for most buses will be at Genting Resort Hotel or First World Hotel, while KKKL also provides an arrival point at Awana Genting Hotel.

The journey usually takes about 7 hours depending on traffic condition. Do take note that departures are divided into morning and night sessions with no afternoon or evening sessions. Passengers are advised to choose the correct departure time for them to avoid any disappointment.

Operators who Serves Bus from Singapore to Genting Highlands

The journey of 7 hours sounds long but with fully reclining seats, air conditioning, personal entertainment system installed in Transtar Solitaire coaches and WTS CEO Platinum Cruiser, passengers may feel like their journey is shorter than the actual duration. Some other coaches like The One Travel, and KKKL provide standard VIP coaches with full reclining seats and air conditioning. Wifi is also provided in certain Transtar and Grassland Express coaches.

Theme parks like Universal Studios Singapore® and Walt Disney Company have found massive success in adapting its films into themed attractions. By 2020, we foresee to a surge in visitors taking bus Singapore to Genting Highlands after the opening of the first-ever film-inspired theme park by Twentieth Century Fox at Genting Highlands. Twentieth Century Fox World in Genting Highlands Malaysia will feature roughly 25 thrill rides and attractions based on films like “Rio,” “Ice Age,” “Life of Pi,” “Planet of the Apes” and “Alien vs. Predator.”