Home » Bus from KL to Singapore

Bus from KL to Singapore 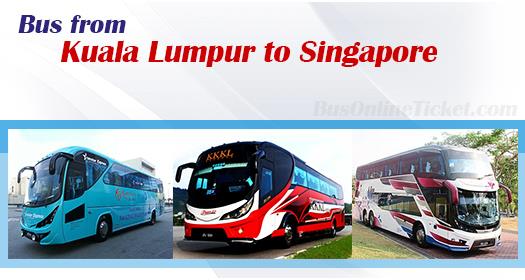 Why Take the Coach and Not Go by Flight?

One of the main attractions of taking a coach is that the departure point for bus is always in a city area, whereas KLIA2 is about 45 minutes to 1 hour driving distance away from KL city area. So the coach offers a convenient departure point.

Besides that, another advantage of taking a coach is that a bus is always more comfortable with fully reclining seats and air-conditioning environment. Some luxury coaches go further by offering Wifi and personal TV entertainment. For example, KKKL, Billion Stars and Grassland Express coaches are equipped with Wifi services while Grassland Royal VIP, Fivestar High Deck, Transtar Solitaire, and First Coach are installed with personal TV entertainment. Other popular operators are also available such as Causeway Link, Eltabina Express, WTS Travel and many more.

The duration for bus travel from KL to Singapore usually takes about 5 hours. However, if there is heavy traffic at Woodlands Custom, it will take much longer time, especially during after-work hours. Some coaches will enter Singapore via Tuas checkpoint to avoid traffic, so you may expect smoother custom traffic and about 5 hours journey. For example, KKKL and Starmart coaches enter Singapore via Tuas checkpoint.

BusOnlineTicket.com portal accepts online booking payment with Paypal, Visa and Master credit card, as well as internet banking via CIMB One Click, Maybank2u, Hong Leong Connect, RHB Now and others. Secure payment makes booking a bus ticket online simple. Apart from that, with many bus operators, departure times and points of arrival to choose from, this makes BusOnlineTicket.com one of the most popular online booking portal among its customers throughout these years.